How to Avoid Becoming a Social Media Disaster

Mashable recently posted an article on the 11 Biggest Social Media Disasters of 2012 (thanks @suzannecohen01 for sharing) featuring major brands like McDonalds, Gap, Kitchen Aid and Stub Hub. This begs the question – if major brands like these can slip up, what does a smaller organization need to do to effectively govern their social media messaging?


On many of these posts, it’s clear that the author had a quick thought and posted it immediately in hopes of achieving the maximum engagement. However, “striking while the iron’s hot” isn’t nearly as important as ensuring that the message is appropriate before posting. I get that the post about Obama’s grandmother was time sensitive (being that it happened during a debate, right after he made a comment about it), but in almost any other context (whether you like him or not), that type of comment wouldn’t be well received. And while many social media tools don’t have integrated workflow capabilities, many web content management systems like (and including) Ektron do, which can really help here.


We’re all super funny on Twitter and Facebook – we’re like a universe full of Jerry Seinfeld’s and Louis CK’s. Not quite. In fact, we’ve all probably posted a thing or two that we found really humorous only to find that no one else found it nearly as enjoyable. Humor is something that definitely needs to be used on social media outlets to make your messaging more human, and while more crude posts might be ok on Facebook (where you’re likely more surrounded by friends than customers/partners/potential consumers), you still need to exercise caution. Think before you post.


Maybe your Driver’s Ed teacher didn’t tell you this, but mine did, and it’s stuck with me. He said, “Would you do X if there was a police officer next to you?” It could have been turning on a No Turn on Red or doing a funky U Turn in an area where they’re not allowed, but the exercise was meant to get you thinking about whether or not you’d do something if the person able to punish you for doing it was right there. There isn’t really a social media police to speak of, but think of your boss, a customer, or a social media person you look up to and ask yourself the same question – it should help keep you out of trouble…


The one element that carries true in these examples is that if a little common sense had been applied, many (if not all) of them could have been avoided. Take McDonalds for example – if you ask people to share stories about their experiences with McDonalds and only expect positive responses – that’s simply naïve. In fact, research shows that users are much more likely to share a negative experience via social channels than a positive one. Same goes for the retailers that tried to use the shooting in Aurora, Colorado or Hurricane Sandy as an opportunity to move merchandise – common sense definitely would have prevailed in those instances.
To err is human. We all make mistakes and for better or worse, social channels like Twitter, Facebook, Linked In, Instagram, Foursquare and others allow those mistakes to be magnified. But, if you apply a little common sense, you’ll be that much better off.

A Look Back at Ektron’s Synergy 2012 Conference 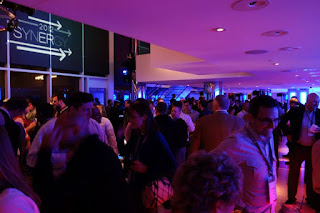 Wow. I have to admit -- I was a bit of a skeptic when I learned we were hosting our annual conference in Washington, D.C., the day after the election. I thought people would be distracted, flights would be too expensive, or maybe people just wouldn’t want to travel this close to Thanksgiving. And with sessions running until almost 5 pm on Friday, I expected it to be a ghost town on Friday after lunch (indeed it was quite the opposite).

But wow, that was a great experience for the Ektron community.

I have the privilege of being one of the few folks that have had the opportunity to attend every Ektron Synergy conference over the past six years. This includes two trips to Boston, two to Orlando, last year’s craziness in Las Vegas, and this year’s patriotic version in the capital. This means that I’m more than capable to share what made this year’s conference one of the best (at least in the top 5!).

Synergy has always featured excellent keynote presentations from industry leaders and experts like Lisa Welchman, Microsoft, and others. However, this year’s group was pretty ridiculous. Not only were they talking about hot topics like Responsive Web Design and Mobile First, they focused on the most important takeaways from Synergy and were engaging, energetic speakers. I highly encourage you to check out the webcasts of them if you have the time (available here: http://www.ustream.tv/recorded/26846449).

While most conference attendee’s primary focus is to learn about the latest technology enhancements and industry trends, I can make an argument that the most valuable part of attending the Ektron Synergy conference is the opportunity to network with other users, partners, and the Ektron team. For me, it’s a chance to connect old friends, long-time customers, and colleagues with new friends, prospective users, and new customers. The community that Ektron fosters is really a strong advantage that allows us to engage our community members at a much more personal level than the standard vendor/client relationship. If you don’t believe me, join the Ektron Inner Circle (http://www.ektron.com/community/nominate/) to see for yourself.

In many of the conferences that I attend, the majority of the sessions (outside of the keynotes) are led by the technology vendor or primary sponsor. With Ektron Synergy, that’s not the case. While there are Ektron-led sessions around new functionality and complex technical elements, many of this year’s sessions were led by Ektron clients and partners. The story changes dramatically when that’s the case because they’re not up there just telling you only about all the positives of their experience with Ektron – they’re up there relating their honest experience. This is very powerful, and one reason that I think we’ll see even more client and partner presentations at the next Synergy conference.

I come back to my point earlier about Ektron’s community, but go back and check the tweet stream for the hash tags #ektron, #EktronSynergy, and my personal favorite, #ektronbacon. Not only will they be wildly entertaining, but it will help paint a picture as to what the event really brought to the table. The connections people made; the key information pulled from each session; really, the true value that attending an Ektron event has to offer. I've embedded some of the best for you throughout this post.

Every conference aims to leave you with one or two things to look for in the near future. In year’s past, Synergy has focused on the big Version 8 release or the Digital Experience Hub. However, this year, more sessions included information not just about how Ektron got here, but where Ektron’s going.

Highlights from the forthcoming Phoenix release talk about the Awesomizer and other user experience enhancements that are sure to make any content author or business user jump out of their seat. And it’s not that Ektron has ever lacked innovation, it's just that we’ve always held it a tad closer to our chest. We’re proud of how we got here and even more excited about where we’re heading.

It was a fun event and if you had the opportunity to attend, I want to extend a sincere Thank You. We love to get our customers and partners together as much as possible and that’s why you’ll see even more events including regional user groups, developer meet-ups, and more in 2013. We hope that you had a great time, I know I did.

Special thanks to Brian Browning for taking so many great photos and for allowing me to use them here.